Mr. Friedland commented: “The discovery of copper mineralization at East Ridge is exciting in that it appears to be open for expansion in all directions. This area, identified by our Typhoon™ surveying system, and backed by detailed geological analysis, has proven the effectiveness of our ability to discover new copper deposits in areas hidden under gravel cover within the Basin and Range Province of the Western United States.”

“In addition, the results from our drill campaign at Santa Cruz have confirmed the spectacular grade of the known Santa Cruz Deposit. With the steady pace of new information being received from our work at Santa Cruz, we are increasing our understanding of this enriched copper deposit. Using our Typhoon™ technology, and now with the knowledge of the Santa Cruz ‘fingerprint’, we are encouraged by the prospect of additional copper discoveries in the area.”

Graham Boyd, Vice President of U.S. Projects, commented: “Drilling at East Ridge has returned impressive oxide copper mineralization in our first step-out exploration holes. In particular, hole SCC-105 has returned strong visual results, intersecting over 100 meters of consistent copper oxides. Further, at the Santa Cruz Deposit area, the assays received for infill hole SCC-084 have demonstrated a broad zone of soluble oxide copper in exotic, oxide and chalcocite mineralization. These results suggest that we have only begun to uncover the potential of this district.” 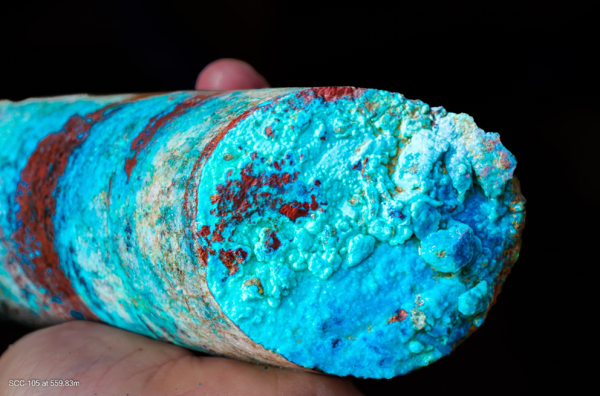 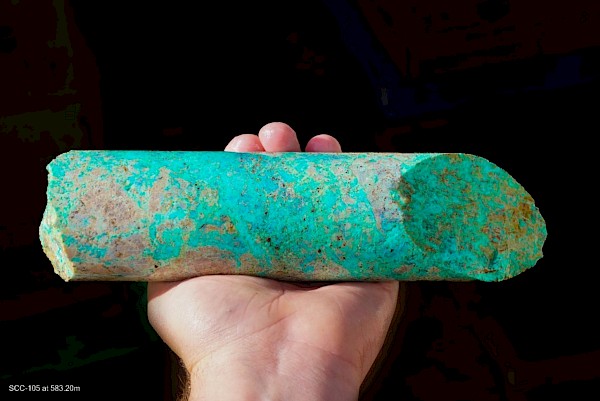 The initial exploration results from East Ridge are promising and appear to confirm exactly what TyphoonTM had indicated, which is that additional sulfide bodies exist and appear to be associated with new zones of enriched soluble copper mineralization. Additionally, the East Ridge discovery area is only 300 meters from the Santa Cruz Deposit, indicating the potential for nearby additions to the resource. 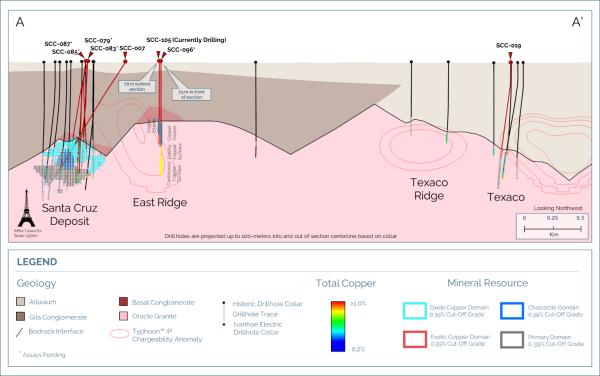 Texaco Ridge is part of the greater Texaco exploration target, located approximately 3 kilometers northeast of the Santa Cruz Deposit. Ivanhoe Electric previously disclosed drill hole SCC-019 on the Southern margin of the Texaco exploration target, which intersected 73 meters of 2.21% total copper (refer to the Santa Cruz Technical Report dated June 7, 2022). TyphoonTM has identified a large zone of chargeable material in a shallower “ridge” environment in the subsurface basement topography. This area has been very sparsely drilled and is another area with the potential for the discovery of additional enriched copper mineralization. We plan to start drilling in this area in the near future.

We expect a steady return of assay results from both labs currently processing samples for the Santa Cruz Copper Project drill core over the next several weeks. 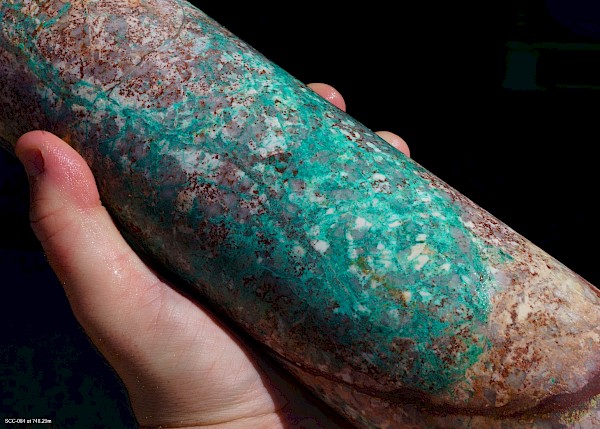 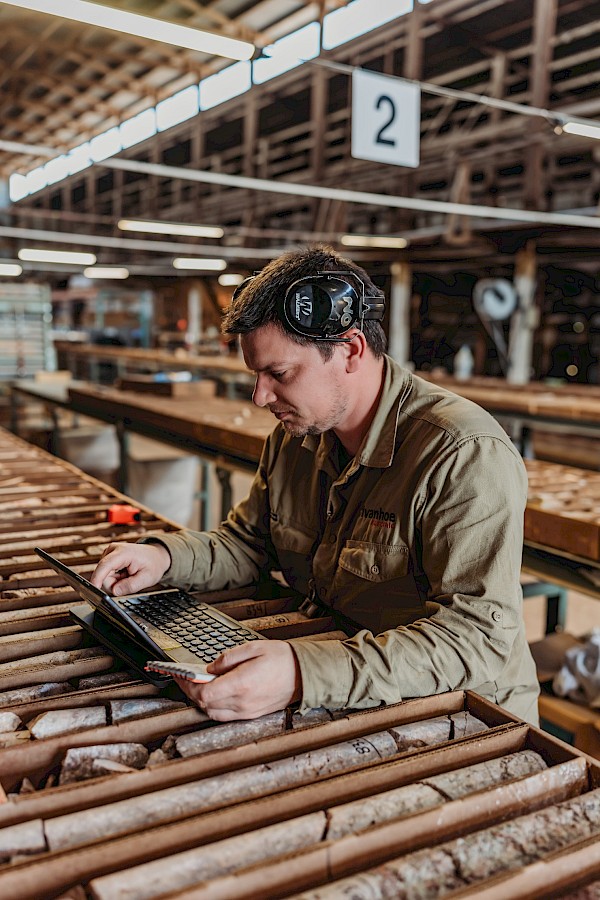 Ivanhoe Electric is currently drilling an area known as the “Newmont Parcel” (see figure below). This is an 80-acre parcel immediately contiguous to both the highest-grade zones of the Santa Cruz Deposit and the East Ridge discovery.

The “Newmont Parcel” was not drilled by previous operators during any of the major exploration campaigns completed by David Lowell (Hanna-Getty of Cleveland, Ohio and East Meadow, New York, respectively) or ASARCO of Tucson, Arizona in the 1970s. This specific parcel of land was owned by Newmont Corporation of Denver, Colorado at the time, but Newmont never drilled the area. The parcel subsequently was consolidated by previous project owners, but was also never drilled. It now forms part of our 100%-owned interests, and is an important exploration area.

Ivanhoe Electric has drilled three holes on the “Newmont Parcel”, SCC-008 and SCC-011 (refer to the Santa Cruz Technical Report dated June 7, 2022) and SCC-105 (see above). All three holes have intersected significant zones of oxide copper mineralization that remain open in all directions.

As previously described, SCC-105 demonstrates that the East Ridge discovery is open in multiple directions for expansion.

SCC-005, which intersected 57 meters grading 3.52% copper (2.77% total soluble copper) at a downhole depth of 636 meters (refer to the Santa Cruz Technical Report dated June 7, 2022), was collared just 60 meters from the western boundary of the Newmont Parcel, and mineralization remains open into the Parcel area.

SCC-099 is currently being drilled on the western boundary of the “Newmont Parcel”. 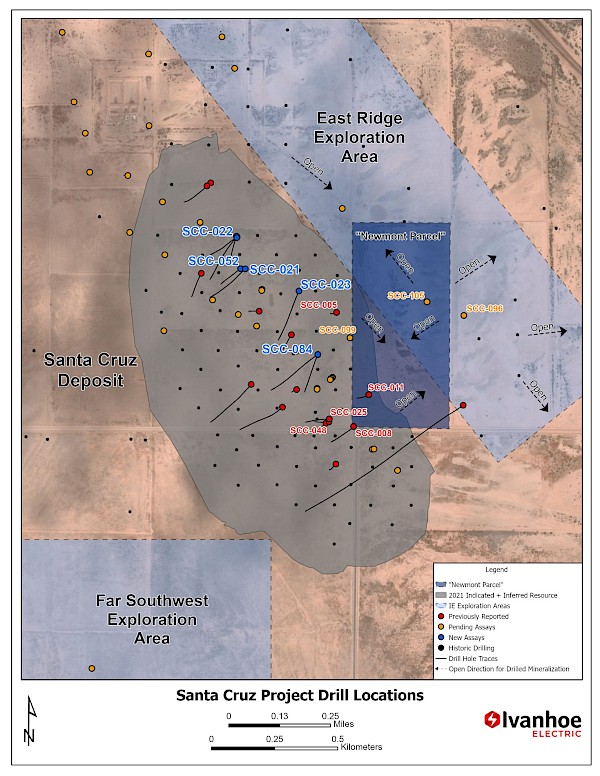 Disclosures of a scientific or technical nature included in this news release, including the sampling, analytical and technical data underlying the information, have been reviewed, verified, and approved by Glen Kuntz, P.Geo., and Christopher Seligman, MAusIMM CP (Geo), each of whom are Qualified Persons as defined by Regulation S-K, Subpart 1300 promulgated by the U.S. Securities and Exchange Commission and by Canadian National Instrument 43-101. Each of Mr. Kuntz and Mr. Seligman is an employee of Ivanhoe Electric.

The technical report summary and technical report include relevant information regarding the assumptions, parameters and methods of the mineral resource estimates on the Santa Cruz Project cited in this news release, as well as information regarding data verification, exploration procedures and other matters relevant to the scientific and technical disclosure contained in this news release.

Ivanhoe Electric is an American technology and mineral exploration company that is re-inventing mining for the electrification of everything by combining advanced mineral exploration technologies, renewable energy storage solutions and electric metals projects predominantly located in the United States. Ivanhoe Electric uses its Typhoon™ transmitter, an accurate and powerful geophysical survey system, together with advanced data analytics provided by its subsidiary, Computational Geosciences, to accelerate and de-risk the mineral exploration process as well as to potentially discover deposits of critical metals that may otherwise be undetectable by traditional exploration technologies. Through its controlling interest in VRB Energy, Ivanhoe Electric also develops and manufactures advanced grid-scale vanadium redox battery storage systems. Finally, through advancing its portfolio of electric metals projects located primarily in the United States, headlined by the Santa Cruz Copper Project in Arizona and the Tintic Copper-Gold Project in Utah, as well as projects in Montana, Oregon and North Carolina, Ivanhoe Electric is also well positioned to support American supply chain independence by delivering the critical metals necessary for electrification of the economy.

Certain statements in this news release constitute “forward-looking statements” or “forward-looking information” within the meaning of applicable U.S. and Canadian securities laws. Such statements and information involve known and unknown risks, uncertainties and other factors that may cause the actual results, performance or achievements of the company, its projects, or industry results, to be materially different from any future results, performance or achievements expressed or implied by such forward-looking statements or information. Such statements can be identified by the use of words such as “may”, “would”, “could”, “will”, “intend”, “expect”, “believe”, “plan”, “anticipate”, “estimate”, “scheduled”, “forecast”, “predict” and other similar terminology, or state that certain actions, events or results “may”, “could”, “would”, “might” or “will” be taken, occur or be achieved. These statements reflect the company’s current expectations regarding future events, performance and results and speak only as of the date of this news release.

This news release also contains references to estimates of Mineral Resources. The estimation of Mineral Resources is inherently uncertain and involves subjective judgments about many relevant factors. Mineral Resources that are not Mineral Reserves do not have demonstrated economic viability. The accuracy of any such estimates is a function of the quantity and quality of available data, and of the assumptions made and judgments used in engineering and geological interpretation (including estimated future production, the anticipated tonnages and grades that will be mined and the estimated level of recovery that will be realized), which may prove to be unreliable and depend, to a certain extent, upon the analysis of drilling results and statistical inferences that ultimately may prove to be inaccurate. Mineral Resource estimates may have to be re-estimated based on: (i) fluctuations in copper, gold or other metal prices; (ii) results of drilling and other exploration activities; (iii) metallurgical testing and other studies; (iv) proposed mining operations, including dilution; (v) the evaluation of mine plans subsequent to the date of any estimates and/or changes in mine plans; (vi) the possible failure to receive required permits, approvals and licenses; and (vii) changes in law or regulation.

Forward-looking statements are based on management’s beliefs and assumptions and on information currently available to management. Such statements are subject to significant risks and uncertainties, and actual results may differ materially from those expressed or implied in the forward-looking statements due to various factors, including changes in the prices of copper or other metals Ivanhoe Electric is exploring for; the results of exploration and drilling activities and/or the failure of exploration programs or studies to deliver anticipated results or results that would justify and support continued exploration, studies, development or operations; the final assessment of exploration results and information that is preliminary; the significant risk and hazards associated with any future mining operations, extensive regulation by the U.S. government as well as local governments; changes in laws, rules or regulations, or their enforcement by applicable authorities; the failure of parties to contracts with the company to perform as agreed; and the impact of political, economic and other uncertainties associated with operating in foreign countries, and the impact of the COVID-19 pandemic and the global economy. These factors should not be construed as exhaustive and should be read in conjunction with the other cautionary statements described in Ivanhoe Electric’s registration statement on Form S-1, as amended, filed with the U.S. Securities and Exchange Commission and base PREP prospectus filed with Canadian securities commissions.